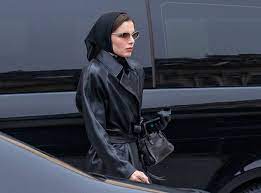 In January, Vogue France faced heavy criticism from Social Media users after posting a picture of model and actress Julia Fox to their Instagram feed. In the picture, the celebrity wears an all-black look, including a black headscarf covering most of her hair. Initially, Vogue France titled the post “yes to the headscarf”. However, the caption attracted such negative attention from Social Media users that it was later edited, without Vogue France acknowledging the change. The post received more than 4,000 comments, unusual for a Vogue France post. In the comments, people decried the double standard of idolizing Western women for wearing a headscarf as a fashion statement, while discriminating against Muslim women choosing to wear the hijab, a garment worn to cover the hair for religious purposes. But what exactly made Social Media users, especially women wearing the hijab, so angry about the move?

Cultural appropriation comes to mind. The term originated in the 1980s in academic spaces in relation to colonialism but has recently been adopted into popular culture. It describes a member of a dominating, majority group adopting cultural elements of a marginalized minority group in disrespectful ways. This could be a White person profiting from selling Native American-looking jewelry, someone wearing cultural or religious clothing of a marginalized group as a costume, or a White woman wearing a headscarf – a symbol of faith and modesty for Muslim women around the globe – as a fashion trend. While most people enjoy elements of a culture other than their own in respectful ways, for example when trying out different cuisines or learning new languages, appreciation turns into appropriation when people from a dominant culture profit financially or socially from a minority culture, without any regard for the symbolism a cultural item might hold.

For many Muslim women, Vogue France applauding Julia Fox for wearing a headscarf is particularly hurtful, because Muslim women wearing the hijab in France are subjected to incredible discrimination. In an interview with CNN, French-Moroccan model and activist Hanan Houachmi criticizes: “Yes to the headscarf – those few words were so simple, […] yet we’ve been begging and waiting and fantasizing about the day we will hear them, for us as hijabi women.”

In fact, French government policies towards Muslims have long been criticized for their discriminatory implications. In 2011, France became the first European country to ban face-covering garments in public, including niqabs. In 2022, a CAGE report concluded that the measures taken by the French government regarding Muslims fall under the definition of persecution under international law. The question is, would Vogue France applaud a Muslim woman for making the choice of wearing the hijab? Or is wearing a headscarf only accepted when a White woman does it for media attention, promoting the French fashion industry?

Cultural anthropologist Sandra Niessen knows: “Rather than expendable physical landscapes, fashion sacrifice zones are dress traditions, and their makers, associated with fashion’s ‘other half’, that are destroyed for, and by, the expansion of industrial fashion”. We see a clear connection to colonialism: Both cultural appropriation and colonialism have as its main goal to extract resources – land resources or cultural resources – from a less dominant people for the sake of profit-making. Rites, cultural traditions, and clothing that exist for the purpose of religion or culture alone become meaningless in societies living by these Capitalist rules. The world is instead seen as one big minefield for resource extraction and market creation.

From this viewpoint, it is incomprehensible why Muslim women wish to wear the hijab for purposes of faith alone, while supported when a White woman wears a headscarf as a bold fashion statement that turns attention to the French fashion industry. On the head of Julia Fox, the headscarf becomes a symbol of fashion innovation, a new product to be sold to customers, a resource to be extracted until another resource comes along to turn into a commodity. Vogue France’s encouraging caption, completely indifferent to the struggles Muslim women wearing the hijab in France face today, feels like nothing more than an ad slogan.

Genuinely appreciating another culture or religion, coming from a place of respect and humbleness, will always bring people together in positive ways. Profiting from a minority groups’ cultural and religious items as member of a dominant group, however, alienates minority groups and shows a lack of respect for other peoples’ heritage. Sometimes, the line between appreciation and appropriation is small. As Edward Said reminds us, ‘appreciating’ – not seldomly in fetishizing ways – other cultures was the starting point for Europe to turn what they perceived as ‘the East’ into its colonies. One should not forget this painful history when discussing cultural appreciation and appropriation. Vogue France, editing the Instagram caption without addressing the root of disturbance that made them change it in the first place, shows a disregard for the voices of Muslim women, the very same marginalized group that would appreciate to hear a “yes to the headscarf” from the dominant group.