“We do not inherit the earth from our ancestors; we borrow it from our children”, Native American Proverb

The picture above dates back to the 15th of March 2019 and it shows an inflatable planet Earth bouncing around the crowd during a climate-change-awareness demonstration in Sydney. On that day, thousands of environmentally concerned students in 80 countries held a “Fridays for Future” strike, marching through the streets with powerful signs. 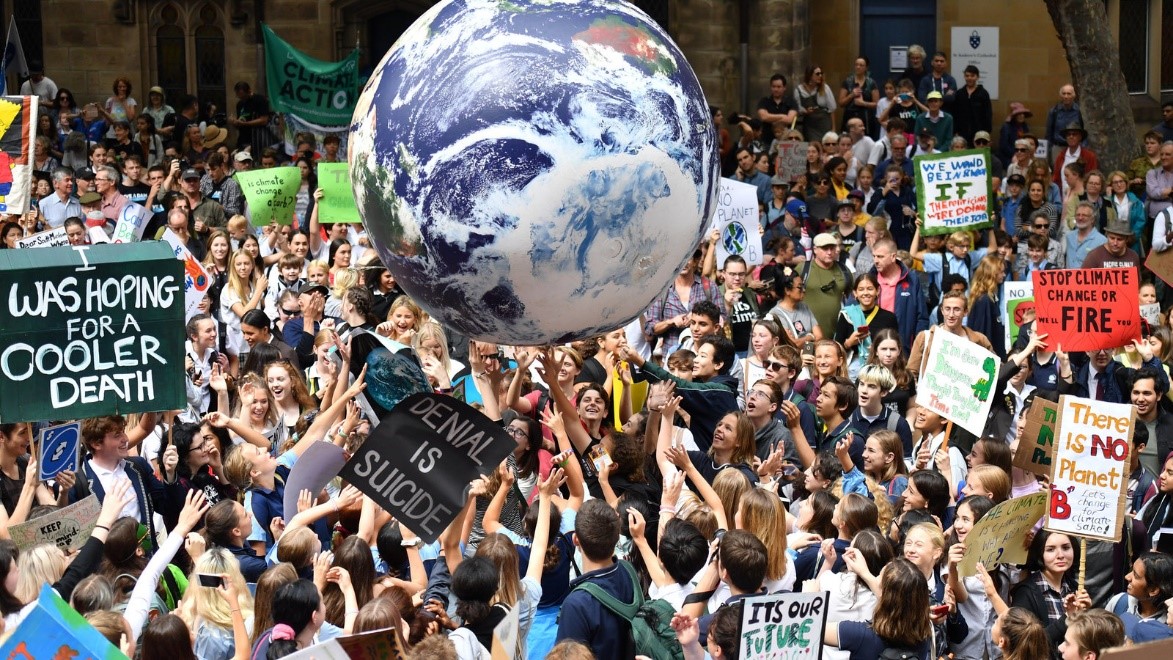 Since the beginning of 2019, large numbers of protests against government inaction on issues of climate change have been taking place in cities worldwide. The movements were largely student-led and took place in Europe for the most part. The Swedish teen activist Greta Thunberg, who has been speaking out and demanding action from leaders since 2018, has inspired the protests. Friday for future is a student-led movement, with the aim to put moral pressure on policymakers, to make them listen to the scientists, and then to take forceful action to limit global warming. The students strike trying to avoid the worst climate disasters ever and to build a better future.

The movement, that declare itself independent of commercial interests and political parties, has already inspired thousands of people around the world to take action on climate crisis. However, what is climate change?. The concept of climate change refers to long-term shifts in temperatures and weather patterns. These shifts may be natural, but since the 1800s, human activities have been the main driver of climate change, primarily due to burning fossil fuels like coal, oil and gas. Burning fossil fuels generates greenhouse gas emissions that envelop the Earth, trapping the sun’s heat and, consequently, we witness the raise of temperatures.

Examples of greenhouse gas emissions that are causing climate change include carbon dioxide and methane. These come from using gasoline for driving a car or coal for heating a building, for example. Clearing land and forests can also release carbon dioxide. Landfills for garbage are also a major source of methane emissions. Energy, industry, transport, buildings, agriculture and land use are among the main emitters. Greenhouse gas concentrations are nowadays at their highest levels in 2 million years and emissions continue to rise. As a result, the Earth is now about 1.1°C warmer than it was in the late 1800s and the last decade (2011-2020) was the warmest on record.

These human activities, such as the use of fossil fuels, deforestation and unsustainable agriculture contribute to climate change, which decreases the availability of nutritious food and clean water, and destroys ecosystems and safe living environments. It also causes droughts, water scarcity, severe fires, rising sea levels, flooding, melting polar ice, catastrophic storms and declining biodiversity. This leads to malnutrition, ill health and migration, rendering youth particularly vulnerable. Climate change effects, like sea-level rise are forcing whole communities to relocate, and in the future, the number of “climate refugees” is expected to rise.

In December 2019, thousands of protesters were asking the Australian government to act on the devastating bushfires and air quality crisis. Months of bushfires across New South Wales and Queensland burnt nearly 3 million hectares of land. During the bushfires week, the level of dangerous PM2.5 particles in Sydney’s air reached as high as 10 times normal. Fine particulate matter (PM2.5) is an air pollutant that is a concern for people’s health when levels in air are high and exposure to them can cause short-term health effects, affect lung function and worsen medical conditions such as asthma and heart disease.

There is a huge disparity between countries when comes to emissions and responsibility regarding the climate crisis. There are few countries that more than others should take action to reduce their carbon emissions. Even if it should be a concern for all countries, the biggest polluters have the responsibility to act first. Governments and international institutions seem to be working on solutions and international agreements to reduce global warming and take serious actions through reforms and significant financial investments.

The current pandemic crisis is an opportunity for Nations to rebuild their society through recovery plans, shifting to a more sustainable economy. The UN (United Nations) Secretary-General has proposed six climate-positive actions for governments to build back their economies and societies:

We all can make little changes in our daily life starting with being more conscious of our choices. Together we can start building a cleaner, greener and healthier world for us and for the next generations.

Here, some actions we can take to slow down climate change:

Do not underestimate the power of spreading the word and getting involved in social campaigns and movements.

Imperial College London, 9 things you can do about climate change, The Grantham Institute