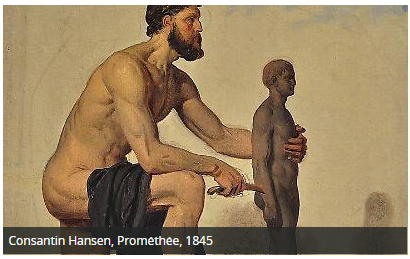 The Lie has no feet is an expression coined by Phaedrus, a storyteller of the 1st century, who never imagined that almost 2 thousand years later his concept of lies would be overturned, gutted and reinterpreted. But let’s start by telling the story of the fairy tale of Prometheus and his apprentice called “Deception”. The mythological fairy tale of Phaedrus tells that the master Prometheus, after forging a statue named “Truth”, was suddenly summoned by Jupiter and left his workshop in the care of his apprentice “Deception”. The latter eager to emulate the master, forged a statue using that of Prometheus as a model. His purpose was to be able to make it identical to the one created by Prometheus; unfortunately for him, he ran out of clay and was unable to finish his feet, leaving it unfinished and returning to his previous occupations. Once Prometheus returned, he gave life to the two statues and realized that the copy of the statue of his assistant did not go a long way as an unfinished work, a copy of the original and a misleading representation.

Hence the saying “Lies have short legs/no feet”, which is a very widespread proverbial, has a clear meaning: lies are destined to go little way, to be inevitably discovered, more or less quickly. Now imagine in the era of social networks, mass communication and globalization how the concept of deception and lie can run so fast. Our dear Phaedrus would realize how in the current era the statue of his assistant “Deception” would have reached the speed of Italian Olympic champion Marcell Jacobs: winner of the 100m final at the Tokyo Olympics.

To conclude the re-enactment of the story, updating the fairy tale of Phaedrus we could say: Lies have short legs but they run fast!. Taking a cue from the initial story, as a cultural introduction on the subject of lies, let introduce the concept of fake news. Fake news is articles-news or any kind of information transmitted orally, in writing or through images. They are characterized by invented, incorrect or deceptive information. A “fake news” is designed to manipulate the truth of the facts, for example in favour of economic, political or medical-scientific interests.

The phenomenon of fake news is a constant in the history of every world population, in every age and consists in the dissemination of information manipulated with the aim of obtaining more or less hidden advantages The world of fake news has literally exploded in recent decades within our daily media life, dominated by the mass media. From the point of view of the sociological interpretation of the phenomenon, the study of F.Meschini on “Fake news and post-truth: information and narrative unrest between Gutenberg and Google[1]” is very suggestive. The author considers fake news as information disorders and therefore linked to the relationship that each person has with information; for this reason, they do not depend exclusively on the digital declination of this relationship, although the spread of the news networks and media has made these disorders much more evident than in the past. His analyzes are based on non-obvious premises, such as the sharing of a common rational basis. For this reason, the narrative methods whose mechanisms are at the basis of the effectiveness and diffusion of fake news become fundamental.

The uncontrolled dissemination of false information flows is present in different areas and for different reasons, the two areas of greatest interest are political and medical/scientific. In the political sphere, fake news is mainly used to discredit political rivals and they are also present in propaganda speeches in order to increase the consensus towards one’s work. A study from Michigan State University “The truth behind fake news and politics on social media[2]” analyzes the concept of free speech and whether it should be restricted on social media, to relate the freedom of use of the media and the greater propagation of fake news. There are several philosophical arguments about free speech and public interest that are often invoked, as a guarantee of what are the fundamental rights of human beings. But there are also other viewpoints that allowing such content on social media harms the public interest, arguing that the famous “ideas market” may not work on social media. Political disinformation can plague public dialogue and decision-making, thus making it more difficult for people to find common ground and even pose a threat to public health.

Among the category of fake news, the most are those in the medical/scientific field. Recently with the spread of the covid-19 epidemic, we have been able to notice how not only the virus has spread but also the set of more or less incorrect information. Information that gave rise to conspiracy and denier movements. An interesting study conducted by PAHO[3] analyzes the spreading trends of fake news in Brazil from January to June 2020 related to Covid-19, registering the highest research peaks in the major online tools in recent history. The fake news spread during the first 6 months of the COVID-19 pandemic in Brazil were characterized by political content as well as misinformation about the number of cases and deaths and about prevention measures and treatment. The main dissemination channels were WhatsApp and Facebook, with the use of messages, images, and videos.

A classification of fake news can be carried out by analyzing the nature of the information conveyed:

From the moral point of view, it is interesting the study of Stanley Cohen[4]. According to him the birth and spread of fake news lie in “Moral Panic” and the perception of the threat is transformed into the choice of scapegoats (in the most common case), from this it arises as consequently the need for people to believe in something, to be fed by information.