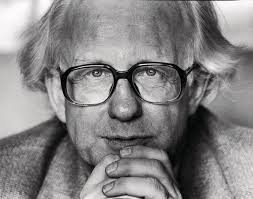 “Peace appeals to the hearts – studies to the brain. Both are needed, indeed indispensable. But equally indispensable is a valid link between brain and heart.”

Johan Galtung (Oslo, 1930) is a sociologist and is widely considered the founder of Peace Studies, being the first one to launch it as a field of inquiry. Holding both a PhD in Mathematics and one in Sociology, his family heavily influenced his academic path. Especially his father – a multi-faceted professional with a background at the Military Academy, a degree in Medicine and a wide knowledge of Political Economy – and his mother who was a nurse.

This exposure to holistic learning and to a medical environment led Galtung to privilege medical language to frame his theories. In particular, he developed the Diagnosis (what is the source of suffering), Prognosis (what is likely to happen without intervention) and Therapy (what can be done to reduce violence and suffering) method for conflicts around the world. He was interested in social justice from an early age, as some personal events shaped his understanding and vision. In fact, during the Second World War, his father was imprisoned. This event made young Galtung clearly understand the devastating impact of war on people’s lives. As a result, he was drawn to Gandhian theories and convinced of the necessity of disarmament.

Gandhi’s message of non-violence posed an alternative to war and played a very important role in his view of conflict resolution. In an interview conducted by Henrik Urdal, he states:

“I emerged from the war with a palpable disgust for war, primarily because the war had stolen my father from me, even if he ultimately came back. The war was over, and Gandhi’s message was that there was an alternative.”

His first publication, together with his tutor and friend Professor Arne Naess, was Gandhi’s Political Ethics (1955). The book results in the systematization of Gandhian ethics on conflict resolution. Later on, when moving to Columbia University to study Sociology, he was asked to become an assistant professor: he refused the role in order to come back to Norway and set Peace Studies as a new research field in his own country. Once in Norway, he convinced the Rindle family, who was at that time running and financing ISF (Institute for Social Research), to open up a department dedicated to conflict and peace research within the already existing institute.

In 1959, the Peace Research Institute Oslo (PRIO) was born within ISF. Over the years, PRIO grew into such a strong department, with more people coming on board, that it became a separate reality from ISF. As a result of this enormous theoretical and practical insight into the dynamics of conflict formation, in 1993 another institute was created by Galtung and his wife Fumiko Nishimura: TRANSCEND International. The institute is dedicated to connecting professionals and students from different disciplines but united in making conflict resolution a priority in their practice. After years of research and practice, TRANSCEND developed a method for conflict resolution based on four pillars:

Ultimately, TRANSCEND believes in dialogue with all conflict parties (both direct and indirect), aiming to understand goals, fears and earn their confidence.

The terms negative and positive peace were first introduced by Johan Galtung in the Editorial to the founding editor of the Journal of Peace Research in 1964. In Galtung’s perspective, peace is a relation between two or more parties that can be identified in a person, a state or nation, a region or civilization. Peace is not a property of one party alone, but of both parties – so is the effort to work towards it. In this framework, positive and negative peace can be defined as follows:

Negative peace refers to the absence of conflict, specifically related to direct violence or war. It does not produce harm but creates in different relationships. An example of negative peace is a ceasefire. Positive peace aims at structural integration and is relation-based. It actively creates a context of positive actions and involves the relative actors. It is connected to the attitudes, institutions and structure that actively work to create a peaceful society by eliminating any type of violence, including the most indirect ones.

The concept of peace, as described above, closely relates to the one of violence. Galtung frames three types of violence: direct, structural and cultural. Direct Violence occurs when an actor intends to hurt and harm. It is normally short and quick and it can be directed to a single person – direct violence – or a group – for example, war. Structural Violence is related to societal structure. It generally affects people on their basic needs and ultimately creates misery at the bottom of society. It can be either economic (hunger, no accessibility to the health or educational system) or political (deprivation of freedom and identity). Structural violence is normally put forward not by the act of commission, but by the act of omission. Whereas, Cultural Violence is connected to the aspect of culture that is used to legitimize discrimination, direct or structural violence. It does not directly harm, but it is built on a slower process of deprivation and it generally normalizes dysfunctional aspects of the culture. An example of cultural violence is extreme nationalism. 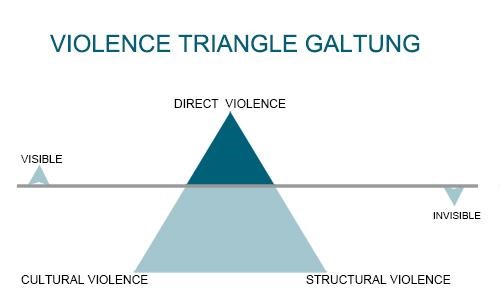 The image above shows a clear model of three types of violence. Despite direct violence being the only one visible – and consequently easier to point out – cultural and structural violence also contribute to creating models of society that do not guarantee dialogue, inclusion and positive human connection. Furthermore, as peace is considered a relational model, also violence follows the same structure. In this sense, we can have three types of relationships between parties:

As discussed in the article, Johan Galtung dedicates his work to finding solutions to conflicts around the world. He does that by building bridges and dialogue. His legacy still impacts peace studies and practices of conflict mediation all over the world. Ultimately, the concept of peace as a relational model can be used to shape our everyday relationships, building them on empathy and understanding.