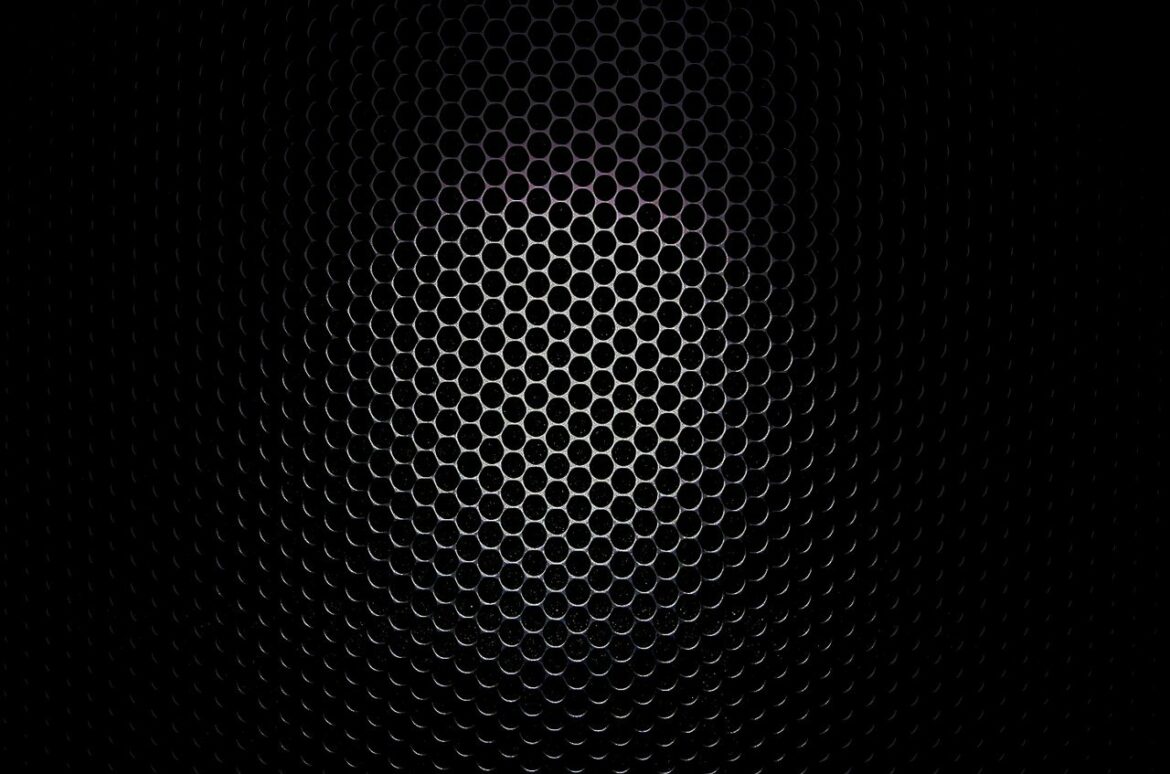 The term ‘fake news’ is commonly expressed without much of a thought in 2021. The phenomenon of fake news, known by many as a political pawn by conservative Americans, is much more complex than the ordinary observer might expect. It is also much more dangerous. The term ‘fake news’ has many definitions. The oxford dictionary defines fake news as ‘news that conveys or incorporates false, fabricated, or deliberately misleading information, or that is characterised as or accused of doing so’. This is; however, an extremely simplistic definition as fake news encompasses many forms of information. Some types of fake news are; satire, misleading content, fabricated content, false connection. Each of these has its definitions and nuances. Claire Wardle argues that ‘none of this detail is captured by the term’, rendering the term to be ‘almost entirely meaningless’ (Wardle 2020). It is imperative to understand the types of ‘fake news’ to equip consumers with the tools to decipher truthfulness. ‘Fake News and its many manifestations have the power to cause harm and erode trust, which ultimately limits the sharing of information.

The first three common categories of fake news to establish are Misinformation, Disinformation and Malinformation. 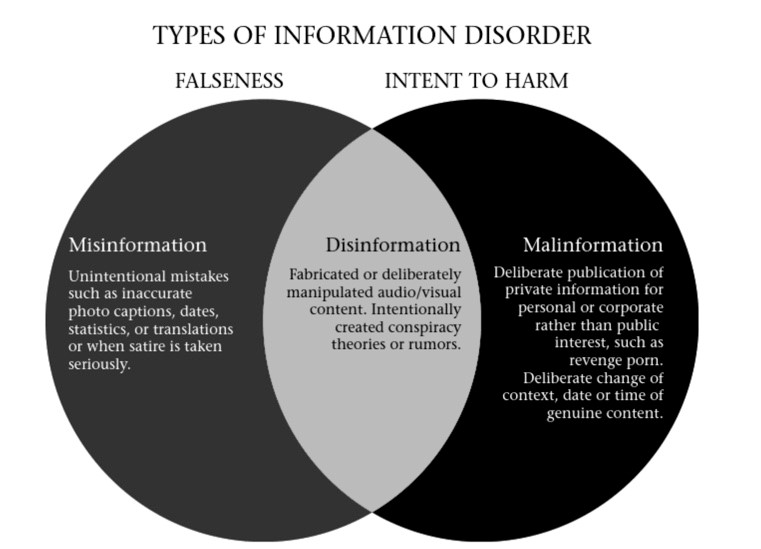 ‘For characterisation, the goal is to understand whether the information is malicious, has harmless intents, or has other insightful traits.’ (K Shu et al. 2020)

This article will outline seven types of ‘Information Disorder’ as adapted from the framework used by Claire Wardle.

Misleading content refers to the ‘use of information to frame issues or individuals in certain ways by cropping photos or choosing quotes or statistics selectively’ (Wardle and Drakshan 2018). It is very common for any individual to draw on statistics and images that support a person’s point. The process of this is explained by framing theory. Gamson and Modigliani have defined framing as the ‘central organising idea or storyline that provides meaning to an unfolding strip of events’ (1987). Enter contends that framing processes occur at four levels:’ in the minds of elites and professional political communicators; in the texts of communications; and in the minds of individual citizens’ (1993,2004). News, therefore, contributes significantly to framing issues, and journalists play a significant role in influencing public discourse.

‘Framing in communication texts arises from networks of professional communicators who engage in framing, defined as selecting some aspects of a perceived reality and constructing messages that highlight connections among them in ways that promote a particular interpretation.’ (Entman, Matthes, Pellicano 2008)

It is argued that ‘frame-consistent information is more likely to be used for the construction of a news report than inconsistent information (Entman, Matthes, Pellicano 2008). Journalists, therefore, need to take care not to select specific statistics, for example, to fit within the already existing narrative. Commonly, unfolding events change frames, and journalists need to follow this. Journalists have a responsibility to give a balanced view of the situation, not mislead consumers.

Satire: Refers to humorous publications which use techniques of exaggeration and mocking to provide information. An essential feature of satire is that satirical news is based on factual examples. An example of this is Mock the Week – A UK based television show that mocks current events. Satirical shows can follow a legitimate news broadcast format, yet they use comedians to discuss events. Despite the humorous nature of these programs, several scholars have argued that satirical programs are becoming increasingly popular, thus solidifying their place in the media sphere. Satire plays an important role in the consumption of news by youth as the comedic value entices younger viewers to more serious news events. Critiques provided by comedians can also highlight essential nuances to news stories. Several studies have argued that those that watch satirical tv shows are as knowledgeable about current affairs as individuals who consume other forms of news media (Kohut, Morin and Keeter 2007). Scholars have conceded the ability of satire to shape public discourse and, political opinion (Brewer, Young, and Morreale 2013).

Parody: Parody differs from satire in that parody uses fictitious news stories to create humour. Many parody shows mimic the same format as satirical programs. A widely known example of parody is the site named The Onion https://www.theonion.com/. This site has often been mistaken for a genuine news site as the layout and professionalism can quickly be taken as a legitimate news agency. An essential difference between parody and satire and other forms of fake news is that the audience is presumed to be involved in the joke.

It can be argued that these two forms of fake news lack the deception element. The purpose is to inject humour and create comedic discussion. This does not, however, guarantee that deception does not occur. When parody and satire are subtle, they have in some cases been taken as factual and shared on legitimate news sites. For example, in September 2021, DelawareOhioNews.com, a satirical site that claims its articles are ‘are parodies – satire, fiction, fake, not real – of people and/or actual events.’ The site posted a story claiming that President Joe Biden was withholding health benefits from unvaccinated veterans. An internet user screenshotted the article and shared it to Instagram, where it proceeded to go viral, being taken as factual by many internet users. While the original site has a disclaimer that the news is a parody, the posts shared on social media do not. However, it was also the case that some users shared the link to the direct article professing the story was factual without noticing the disclaimer.

Imposter content describes the phenomenon where names are attributed to content that that organisation or journalist did not create. This can be the case with organisation logos used alongside content written by an ordinary user. Journalists’ by-lines are often used alongside articles they did not write. Another example is an image being used by an organisation and not attributed to the original photograph owner. Heuristics are highly influential with imposter content. ‘A heuristic is a mental shortcut that allows people to solve problems and make judgments quickly and effectively’ (https://www.verywellmind.com/what-is-a-heuristic-2795235). Humans rely on heuristics to reduce mental effort and quickly make associations. Seeing a recognisable logo on a video or photograph is a heuristic. It is common for us to promptly associate that brand with the content and not question it. Additionally, the excessive amount of information we consume every day makes heuristics more significant.

A dangerous example of imposter content was a video shared repeatedly on WhatsApp with the BBC Africa logo photoshopped onto it ahead of the Kenyan Elections in 2017. BBC Africa, in response, created a video warning people not to be deceived by the video. Another example is smugglers using the UNHCR logo with pictures of yachts explaining to refugees that if they called a certain number, they could get a ticket on this yacht to the Mediterranean. It is effortless in this age to create imposter content. There are sites where you can create ‘fake tweets’ allowing a person to enter a username, and the site will create a tweet with that user’s photograph and bio. This is particularly dangerous as screenshots of these ‘fake tweets’ spread like wildfire and is believed since many people delete tweets quickly. It is therefore difficult to prove this tweet was never posted in many instances.

This is content that has been deliberately manipulated for purposes of deception. This type of fake news frequently occurs with photographs and videos. An example of this was an image that circulated on Twitter during Hurricane Sandy in 2012. The image was fake and was originally from a fictitious disaster movie. An example of video manipulation was a video of Nancy Pelosi, Speaker of the US House of Representatives, giving a speech. The video was altered and slowed down, making it appear as if she was drunk and slurring her words. Genuine News sites often have protocols to prevent manipulation; however, social media lacks this requirement allowing unverified edited content to circulate easily.

This form of fake news refers to content created in the form of a news article with no factual basis. The defining feature of this category of fake news is the intention to misinform. Deception is deliberately used as the consumer has no explicit understanding that the content is not factual. Fabricated news uses existing individuals and narratives whilst simultaneously weaving false content throughout. Fabricated news also follows the form and structure of a genuine news article by a reputable source to make it difficult for readers to verify the information. The sites are so sophisticated that they can also generate income from advertisements.

A common example of a fabricated news story is one that claimed that Pope Francis endorsed Donald Trump. A fake news site called WTOE5 published the article in 2016, and it was copied by a popular fake news site Ending the Fed. According to BuzzFeed, it quickly amassed 960,000 Facebook engagements and led to Pope Francis publicly addressing the US election for the first time. The motivation for producing fabricated content can range from financial incentives, political influence, and personal motivations. In Macedonia, a group of teenagers amassed thousands of dollars using automated advertising bots when publishing fake news stories. The group focussed on American political stories. One teen claimed that he had earned $60,000 in six months, expressing that “Nothing can beat Trump’s supporters when it comes to social media engagement”. (https://www.nbcnews.com/news/world/fake-news-how-partying-macedonian-teen-earns-thousands-publishing-lies-n692451)

False context fake news is where an image, for example, is widely circulated without a current, accurate description of what the image represents. An example was a photo of Hilary Clinton on the campaign trail slipping on a step, which an alt-right news site used as evidence of Clintons failing health. (https://www.breitbart.com/politics/2016/08/07/hillary-clinton-needs-help-getting-stairs/) Another example is a meme created and shared on Reddit of men rioting with text that writes ‘claim trump is going to destroy America – as they go out and destroy America’. This image was taken during a protest in Greece in 2012; hence, it was taken entirely out of context.

This can be extremely dangerous, as images spread much quicker than textual content online. Photos increase social media engagement and enhance information retention. Images are also a powerful tool in influencing public opinion as individuals often believe that an event took place if there is a picture verifying/ supporting it. Photos elicit an emotional response and therefore easily influence people to share them, thus bolstering the lie. David Mikkelson, the co-founder of fact-checking website Snopes, poignantly writes that ‘You don’t need to directly illustrate what you’re saying. You lend it legitimacy simply by the presence of photographs’.  Misappropriation of an image can be very difficult to detect once an image has gone viral. It can be argued that news organisations should not only ensure the validity and clear context of their images but also actively debunk misappropriated content. News organisations have the resources and the knowledge to carry out this task. They additionally have a broad reach to consumers. If an ‘ordinary user’ called out the factual context of a viral image, for example, this would likely have little reach when compared to the BBC publicly proving false context.

A false connection exists where headlines, visuals or captions do not align with the content. A typical example of this is clickbait headlines. To compete with the multitude of news sources on the internet, news sources are often pressurised to write exaggerated headlines to increase internet traffic and ‘clicks’. It is the responsibility of the news industry not to lead consumers to believe a piece of news is about something that is not contained in writing. This is a form of information disorder that many news sites practice.

“While it is possible to use these types of techniques to drive traffic in the short term, there will undoubtedly be a longer-term impact on people’s relationship with news.”  (https://firstdraftnews.org/long-form-article/understanding-information-disorder/); (https://www.rappler.com/technology/social-media/fake-news-explainer) 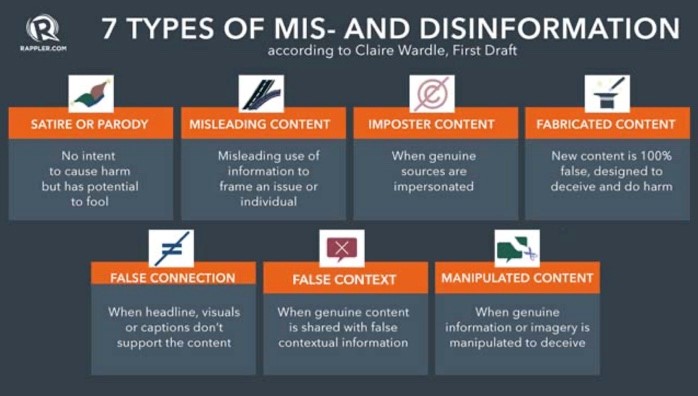