The industry of Public Relations (PR) has a huge impact on how businesses, organizations and individuals communicate. Either through human capital or high-throughput technology, PR companies work towards better understanding their clients’ audiences so that they can be properly engaged to achieve specific business objectives (1). However, the ethical boundaries can usually become very narrow when dealing with sensitive matters such as economical and political affairs.

That’s what happened with Bell Pottinger. Bell Pottinger was a British PR multinational, reputation management, and marketing company headquartered in London, United Kingdom. It was founded in 1998 by Lord Tim Bell, one of the main PR advisers for Margaret Thatcher’s (widely known as “The Iron Lady”) successful electoral campaigns, and Piers Pottinger, and it was recognized by having “the most controversial client list” in the whole PR industry (2). The company was involved in complex and questionable schemes in Iraq, South Africa, Chile, Malaysia, Bahrain, Belarus, and other countries facing geopolitical turmoil. Let’s start with the Middle East. 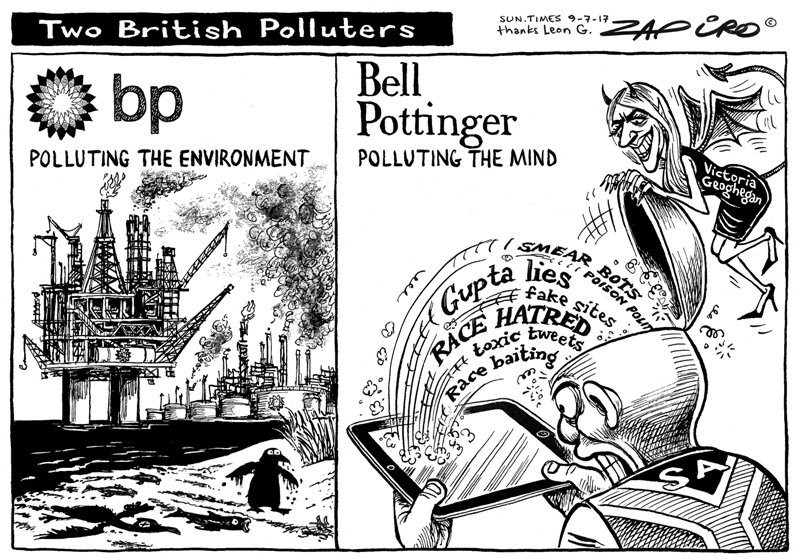 According to the Bureau for Investigative Journalism, Bell Pottinger was hired by the Pentagon in March 2004 to work in Iraq with the purpose of “promoting democratic elections” for an approximate value of 500 million dollars. Nevertheless, concealed behind the official standard communications motif, the company was creating (i) TV ads negatively portraying al-Qaeda, (ii) news items shaped to the “Arabic TV” reality and with the origins sometimes hidden, and (iii) fake al-Qaeda propaganda films (3). Other dubious plots around the world have followed.

As stated before, Bell Pottinger was known for having a contentious list of clients but one usually assumes that there are corporate barriers regarding the people or entities with which an internationally recognized PR company accepts to be involved. This was not a reality for Bell Pottinger. Their involvement with General Augusto Pinochet and Alekandr Lukashenko paved the way for the company to directly collaborate with fiercely dictatorial regimes. General Augusto Pinochet led a military coup against the left-wing Chilean government of Salvador Allende in 1973 and established a dictatorship responsible for more than 3000 deaths and tens of thousands of people tortured or forced into exile. This period of terror lasted until 1990. Although being able to avoid justice in his homeland for decades, General Pinochet was arrested in the UK in 1998 for murder charges. As a response to this event, the Pinochet Foundation hired Bell Pottinger to lead a campaign aiming to release the former Chilean leader. The campaign was based on “reconciliation not retribution” and established its pillars not only on the fragile health of the General but also on its pivotal role in fighting communism in Chile. The campaign was successful and General Pinochet ended up being released in 2000 returning to Chile to live the rest of his life in freedom (4) (5). On the other side of the world, in Belarus, Aleksandr Lukashenko, considered by many Europe’s last dictator, has been ruling the country since 1994 sowing terror in all those who are against the regime. After a conflict over energy tariffs with its neighbouring Russia, Lukashenko tried to overhaul his clout in the West hiring Bell Pottinger to develop a “reputation management” campaign targeted to improve relations with the old continent. The campaign was a failure but again showed the absolute lack of ethical principles within the PR company (4) (5). However, Bell Pottinger’s suspicious involvements were far away from being over.

In 2011, Bell Pottinger signed a deal with the Bahrain Economic Development Board, as a response to the uprisings against the royal family during the Arab Spring, to identify a list of the most influential dissidents on social media perfectly knowing that Bahraini officials were imprisoning and torturing people who took a stand against the regime (6). At the same time, the company was working in Malaysia for Abdul Taib Mahmud, a state chief minister who was frequently labelled as corrupt by the country’s opposition figures. Clare Rewcastle Brown, a left-wing malaysian-born and London-based journalist, was one of the most active Taib criticizers which ultimately resulted in her name being involved in a sexual scandal reported by a blog whose aim was “to protect [the state] against the influences of foreign political groups and activists”. Later, a former Bell Pottinger employee disclosed that the company had produced the material on the blog, alongside other discriminatory content, in exchange for a millionaire annual contract signed with Taid (6).

It was only in 2016 that the company started to collapse. That same year, in January, four Bell Pottinger’s representatives flew to Johannesburg where they met with Oakbay Investments, a company potentially interested in PR counseling. The business was owned by the Gupta brothers, three of the most powerful entrepreneurs in South Africa. They were involved in a plethora of different businesses and maintained a close relationship with Jacob Zuma, the president of South Africa at that time, even having those who considered that the Gupta brothers were managing a “shadow government” due to their clout in the political sphere. The goal of the requested PR campaign was to highlight the economic disparity in South Africa and link it to “white monopoly capital”, a term vastly used during the campaign. The content was almost always based on how black people were facing poverty daily and the role huge white-owned companies played in this regard. The Gupta’s vision on this was that it would not only be beneficial to the country but would also mask up their oligarchic nature behind an “outsider countering white supremacy” costume. Jacob Zuma was pivotal in upholding this narrative. However, when the Zuma-Gupta axis started to fall under rising scrutiny, the campaign suffered a huge blow. The investigation led to Oakbay account details becoming public which resulted in the tarnished reputation of Bell Pottinger and ultimately its bankruptcy in 2017 (6).

Overall, this article serves as an example of how the PR industry can have a huge influence in the international political maneuver, sometimes even recurring to unethical methodologies (e.g. fake news, biased media pieces, etc.) to achieve results based solely on millionaire contracts, showing us the pathogenic dimension of capitalism.

(6) Caesar E. (2018), “The Reputation-Laundering Firm That Ruined Its Own Reputation“, The New Yorker.