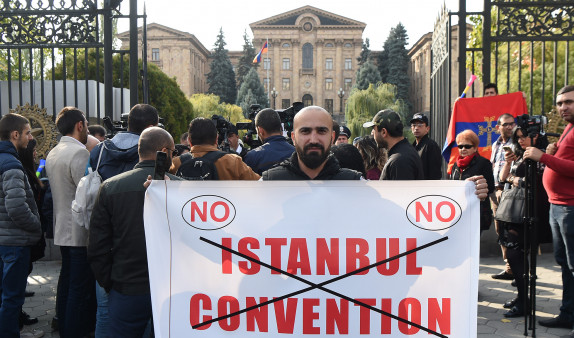 In order to have a clear understanding of the topic mentioned here, we need to agree on some of the definitions and to also think about the following example/question; why do you think we have coca-cola-zero and coca-cola-light? Is it not logical to only have one type of diet cola? we will come to this “issue” at the end of this article.

What is advocacy? Advocacy is a set of actions that are taken in order to influence the decisions of policy-makers. What is Istanbul’s convention? It is a document produced by the Council of Europe in the format of a convention on preventing and combating violence against women and domestic violence. This document is composed of 12 chapters and 81 articles. It was issued in 2011 in Istanbul and signed by 27 European countries and it needed only 10 countries for ratification (18 countries ratified the convention in Europe) in order to enter into force in Europe which happened in August 2014. There is also a group called GREVIO (shorter name) responsible for implementing and monitoring the convention.

Is it controversial? The answer depends on which context; So, if a female is reading the convention then she might find it heaven on earth in terms of prevention and protection. Also, consider the perspective of someone who might consider the convention as being written based on Feminist and Marxist ideologies since it uses the word “gender-based” violence and it also states in the preamble page: “recognizing the violence against women is a manifestation of historically unequal power relations between women and men, which have led to domination over, and discrimination against, women by men and to the prevention of the full advancement of women”. Therefore, presenting this statement “violence against women by men” might be strong for some.
Another context to consider is that not all European countries agreed to sign the convention in the beginning so, countries such as Denmark, Ireland, Romania, Czech Republic, Bulgaria, Hungary, Cyprus, Estonia, Latvia, and Lithuania did not agree on signing and by the fact that 18 countries from Europe already ratify this convention then this means that it should be enforced in the legislative system of all European countries. Still, countries such as Romania which is not agreeing on the convention and therefore, it is not part of its legislative system; this puts activists and civil society organizations who are working on women issues in a situation that would not enable them to use the convention as an “effective” advocacy tools to support their work. Another factor to consider is that some people find the convention is eliminating the fact that violence also may occur against men in peace and in war, and by females sometimes. Also, men might suffer from genital mutilation “circumcision”. In addition to the issue of not mentioning boys and men who are also affected by war and they got executed and raped as much as women got raped “systematically” during war times.
Another point to reflect on since the refugee crisis is aggravating every day with no drastic solution. So, according to the convention priorities for refuge are given to women and children but, the question is what would happen to a family? what would happen to the father?
How to use the convention as a tool for advocacy? Many organizations are already using the convention to support their actions and much more they are basing their work on some of the articles mentioned in the conventions such as combating domestic violence, rape, harassment, circumcisions, and honor killing. One of the interesting articles mentioned in the convention that women under violence are not necessarily the ones who are pressing charges against the perpetrator as there is a mechanism to support and to enable the community members to do that on behalf of the victimized woman. Taking into consideration the EuroMeda context; in some of the European countries that would be a valid thing to use the convention as an advocacy tool since the legislation system is already embarrassing it and there is a great deal of the work is already done by having a supporting system and a powerful body behind the convention (represented by the Council of Europe).

Now, the question would be, what would happen in the other European countries where the convention is not ratified? or in the MENA region where they are not part of Europe and there is a lot to be accomplished in the area of combating domestic violence among other issues related to women’s safety and well-being? Still…

In order to be able to outline a possible methodology for how to use Istanbul’s convention as an advocacy tool in a reality that is not embarrassing the convention, or that might be considered as an irrelevant, we also need to ask the following question, in our reality check, to what extent “tradition” is playing a role in the cycle of violence we encounter against women for instance in some of the cases? and, to which extent the “defined and the approved roles in societies” are taking place (happening, being played perfectly) and what contribution is it making to the issue of domestic violence (and here it does not matter who is practicing violence against the other as it can be female or male)? Therefore, if we agree on the issue of “tradition” and what is considered as a “social norm” and also, due to the other gender roles’ continuously reinforced by the televised drama, commercials and music clips that we consume every day in addition to Disney world targeted at our children at an early age in the “cartoon” characters that are portraying women in perfect figure and wearing high heels (this is in the old Disney style) and now with the reinvented and recycled characters and representation of love and life to the teens as vampires and the endless fantasy we keep on consuming without any realization all of these is again reinforcing gender roles, images and well defining what develops into a norm… a “social norm”.
Going back again to the beginning and why we have two types of coca-cola diet; zero and light. The thing is even it might often happen that we call them both diet or light but, in our behavior, we have two clear distinctions between the use of both. Simply, soda companies are watching our behavior, in fact, they studying and analyzing our behavior like the rest of the companies we deal with to buy clothes, food, entertainment…etc.
Therefore, Zero Coca-Cola is aimed at men who are conscious of their weight and the light one is aimed at one who is conscious also about their weight. So, by looking at this one example (I am sure we have tons of these) there are two facts happening; one is that we are portraying the imposed gender roles and the second, we still ignore the value of understanding the role of “behavior”! Then, if we are considering a science such as social marketing, where it aims at changing (and/or guarding) the positive behavior of the community to be used as an approach then this would be considered as a step on the most correct and relevant track. If we manage to “positively change” community behavior then Voila! problem solved! yes?… it is not as easy as it may sound here…Social marketing is providing us with an opportunity to enable the positive change; “the new behavior” to take place. And, because in social marketing we use a set of actions or what is called “the intervention mix” that is composed of a group of actions under four main categories; SUPPORT, INFORM (i.e. campaign), DEVELOP, and CONTROL (i.e. advocacy).
To conclude, we should do not underestimate the power we can have and the positive influence we can establish. If we believe in something, if we are advocating for anything, if we have a cause… then be sure there are many ways to enable you to fulfill your mission; your cause in life. Make sure to find this way.
Suha Ayyash
Share
Facebook Twitter Pinterest Linkedin