As we all know, the world of today is not the world of tomorrow. Every day, new issues come out to challenge our sense of tolerance and respect. But do you think the society of today is ready to handle these questions? We can find the answer online… opening the Facebook, YouTube or Twitter app and reading the comments that people post about everything. The untouchable idea of free speaking “gives” to everyone the freedom to say or comment on what they want when they want and how they want. Being able to have a critical mind and express your thoughts without troubles is a masterpiece of the modern times that we are still updating.

But, as always, there are two sides to think about! Social media and social platforms are now boosting this idea and spreading the chance to everyone to be active in social issues; at the same time, hate speech online is growing and getting a serious problem. The line between opinions and disrespect tends to be more tenuous this is not a problem of now! The extreme ideologies and attacks on a person or group of people always existed and history can prove it. The difference is that hate speech is clear in front of us everywhere covered by a fake sense of freedom of speech. We recognize the problem but, what can we do to stop the spreading of hate and extreme ideas? The solution can be in the “Alternative Narratives”.

A European Commission (EC) proposal that brings the online and offline counterbalance to the hate speech content available today. The main idea is to create and share positive content creating a real sense of social responsibility in everyone. This new approach can be a way to educate minds and consequently prevent hate thoughts in the actual and future generations. Do you think this is the way? Well, we do not know if Kim agrees with the EC but we are totally sure that Kim Noble’s work is part of the counterbalance content that we think is important to share the message of tolerance and respect. So, let us introduce you, Kim… or Bonnie, Judy, Key or Ria. It depends on the time when you are reading this very article. All these names belong to the same person, Kim Noble, and all the names correspond to different personalities. Confused? Let us explain: the artist of 57 years suffers from dissociative identity disorder (DID), a mental disease characterized by having, at least, two distinct and relatively enduring personality states.

For Kim – the name they wrote in her birth certificate – there are much more than two, they are around 100 separate personalities. From Judy, the teenage bulimic, to the devout Catholic Salamoe, or the gay man Ken, the different personalities change in age, gender and temperament. Probably you have a lot of questions in your mind now, so it is time to explain how this can be possible. More than 90% of the DIDs already known in the world was caused due to childhood trauma, while other cases are related to war experiences, health problems during childhood or genetic factors. Kim believes that she has a childhood trauma. The details are not clear in her mind, but an extreme and repeated abuse during an early age was mentioned by her in her autobiography, “All of Me”.

During adolescence, Kim had many overdoses and was placed on suicide watch in a psychiatric hospital repeating the behavior many times right after being released. She developed anorexia and bulimia, was diagnosed with schizophrenia and was a victim of a pedophile ring ending the situation with a suspect throwing acid in her face. This was the beginning of a complex period that just finished when Noble’s was diagnosed with DID and accepted the disorder. Without medication, she started therapy and discovered the talent to paint. It was a huge step in order to “organize” the different personalities that, back then, she was exposed to. Nowadays she cannot predict when or how often she changes into someone else, but she knows that there are more than 20 different alter egos coming up on her with frequency.

I had to explain my mental health issue to explain the art – Kim Noble, to VICE

We can find her in South London, where she lives with her 20 years old daughter, or in art galleries where she frequently exposes paintings. The same paintings that she turned into a very personal narrative. All the moments that mark her life are directly connected with the existing personality at the time, that’s why all the different personalities have different artistic styles and “life problems” to illustrate. Without rational thoughts or intentions, Noble’s body just paints attending to the alter ego alive at the moment approaching different messages or problems of human life. Gender issues, sexual orientation, religion, diseases, traumatic events and of course, a mental disorder. They are not afraid to expose sensitive topics and call attention to that through art in order to show how equal we are although our characteristics or life events that marked us. All the artworks are screams of tolerance challenging the minds of today and, because art is immortal, they will keep this mission forever.

“(…) IT HELPS ME LEARN ABOUT THE OTHER PERSONALITIES AND GET FEEL AND UNDERSTANDING OF THEM (…)” – Kim Noble, to VICE

The work of Kim is so pure and authentic that brings us the simplicity of important actual issues. With all this different ways of express himself, Kim is the example of how diversity is important and how the world can change for better accepting the differences between each other. 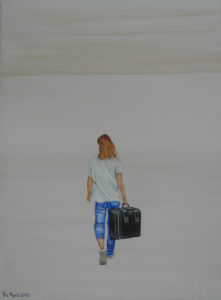 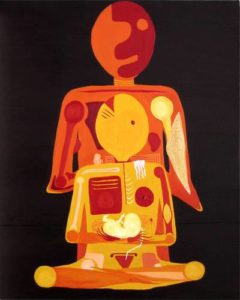 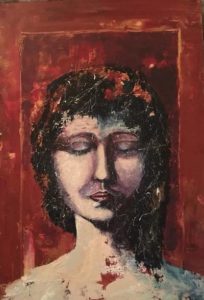 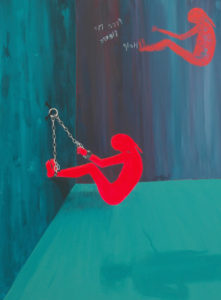