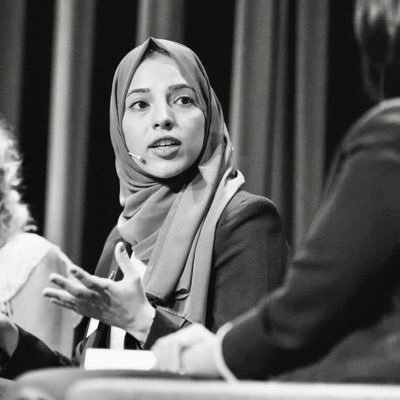 In February 2017, a young girl from Gaza steps onto the podium of the world’s largest international student festival. She is 6000 km away from home, in Norway. Here, hundreds of young people from hundreds of different countries have come together in the name of dialogue, intercultural cooperation, and peace. At this moment they are all gathered to listen to this one young girl. Here is what she says to them:

– I am angry. I was born as a refugee. I am angry. I was born in a conflict area. I’m angry because I grew up in an uprising and had to survive three wars. I have lived through 10 years of siege, and I’m only 22. I had no choice in all of that. I’m so freaking angry. During the last war in Gaza, I had to run for my life, shouting at my siblings to get away from me, because I was scared we were all going to be killed by any random bomb. That day, I was the angriest I could possibly be. I felt like I wanted to blow up the whole world. But I didn’t. I chose peace and hope.

“I felt like I wanted to blow up the whole world. But I didn’t. I chose peace and hope”.

The girl’s name is Dalia. She grew up in one of the most violent and conflict-ridden areas in the world. She lost many of her loved ones to acts of hate. She has seen her community being ripped apart by bombs, poverty, humanitarian and environmental crises. A UN report has predicted that Gaza could become unlivable by 2020 if nothing changes.

Dalia is one of the people believing that change can happen. We talked to her about choosing peace, turning anger into hope and not only believing in change but creating it. This is our conversation.

Questioning ‘why’ and changing attitude

– You have expressed being extremely angry, but still choosing peace and hope. How did you make this choice?

– Yeah, at one point I was so angry. I really wanted to hurt someone the way I had been hurt. However, I am a very curious person. I started questioning why I was thinking like that. And I realized: This is what evil is made of –people not thinking twice about hurting someone else. And I knew that I needed to do the opposite.

– To do positive things, you need a positive attitude. You need to have hope that things can get better. This does not mean that you should stop being angry. Actually, anger can be a powerful positive driving force! What matters is how you manage your anger, whether you make it into destructive or constructive power. And this is up to you. It’s a choice you can make.

To do positive things, you need a positive attitude. This does not mean that you aren’t allowed to be angry. Actually, anger can be a powerful positive driving force.

One of the ways Dalia has turned pain and anger into a positive and constructive force has to do with the death of her cousin Razan Al-Najjar. Razan was a medic working to save the victims of violence in Gaza. She was shot and killed in June, just 21 years old. Even though Dalia was devastated and outraged by Razan’s death, she decided to try to turn the tragedy into something positive.

– I am working with Children of Peace to create a scholarship in memory of my cousin. The scholarship will support young women wanting to become medical professionals. Razan was not able to finish university, as her family couldn’t afford it. We want to give young women like her the opportunity to follow their dreams.

Even though Dalia has chosen positivity, it does not mean she is always happy. Working for change can be a heart-breaking process.

– Sometimes I would come home from my work with people in the poorest neighborhoods and just cry. It’s difficult to be confronted with the issues marginalized children and youth are facing. Now, when I’m studying and working abroad, I can also feel very lonely. It’s hard to be so far away from my family in Gaza. It hurts to know that I can’t help them if something happens.

Despite these challenges, Dalia is adamant that the positive sides of her work far outweigh the negative.

– The best part of my work is actually seeing change happen. It’s amazing. You get addicted to it and want to see more and more.

The best part of my work is actually seeing change happen. It’s amazing. You get addicted to it and want to see more and more.

One of the areas were Dalia is working for change, is water security. Together with four other young people from around the world, she has founded a social enterprise for affordable water filters. Their company wants to ensure that all people have access to clean drinking water.

– Why did you decide to work on this issue in particular?

– I am from Gaza, where 97% of the water is polluted. Unsafe water actually kills more people than wars. It’s a huge issue. Also, I know that it’s extremely difficult for me to do anything about something as big and complex as a war. But when it comes to water, I realized: I can actually do something about this! So that is exactly what our team is doing.

The importance of believing

– A question we will ask all the people featured in our ‘Daring youth’ series: In your opinion, how can young people make positive changes in their own lives, in their communities and in the world?

– I think it’s important to find other people who want to do something as well. This is what we did with our company. What brought us together is the desire to make a change. and believe that we can do it! I truly believe that young people are capable of doing amazing things. This particularly goes for youth from conflict areas such as myself. We are a huge resource. We can lead the peace process ourselves. To do this, we need to stop focusing on our obstacles. Everyone has obstacles. What we need to do, is believe that we can.

We need to stop focusing on our obstacles. Everyone has obstacles. What we need to do, is believe that we can.

– Another thing to remember is that change takes time. You won’t just suddenly wake up one day and be a big changemaker. You need to train yourself. Start small. Find your little corner of the world where you can make a difference. Remember that change comes one step at a time and be patient.

Daring Youth: Young voices for change How is the positive social change made? The Knowledge Hub is launching an article series to explore this question. Rather than focusing on abstract concepts, however, this series is dedicated to the actual people making change happen. We will introduce you to a range of young people working to improve their environment in different ways. Some are entrepreneurs. Some are activists. Some are simply trying to make a small positive change in their own lives. No matter how they may be labeled by others – we call them the Daring Youth. The Daring Youth are not superheroes. They are like you and me. But they have all committed to making a positive change. By sharing their stories, we hope to inspire you to make big or small positive changes of your own.