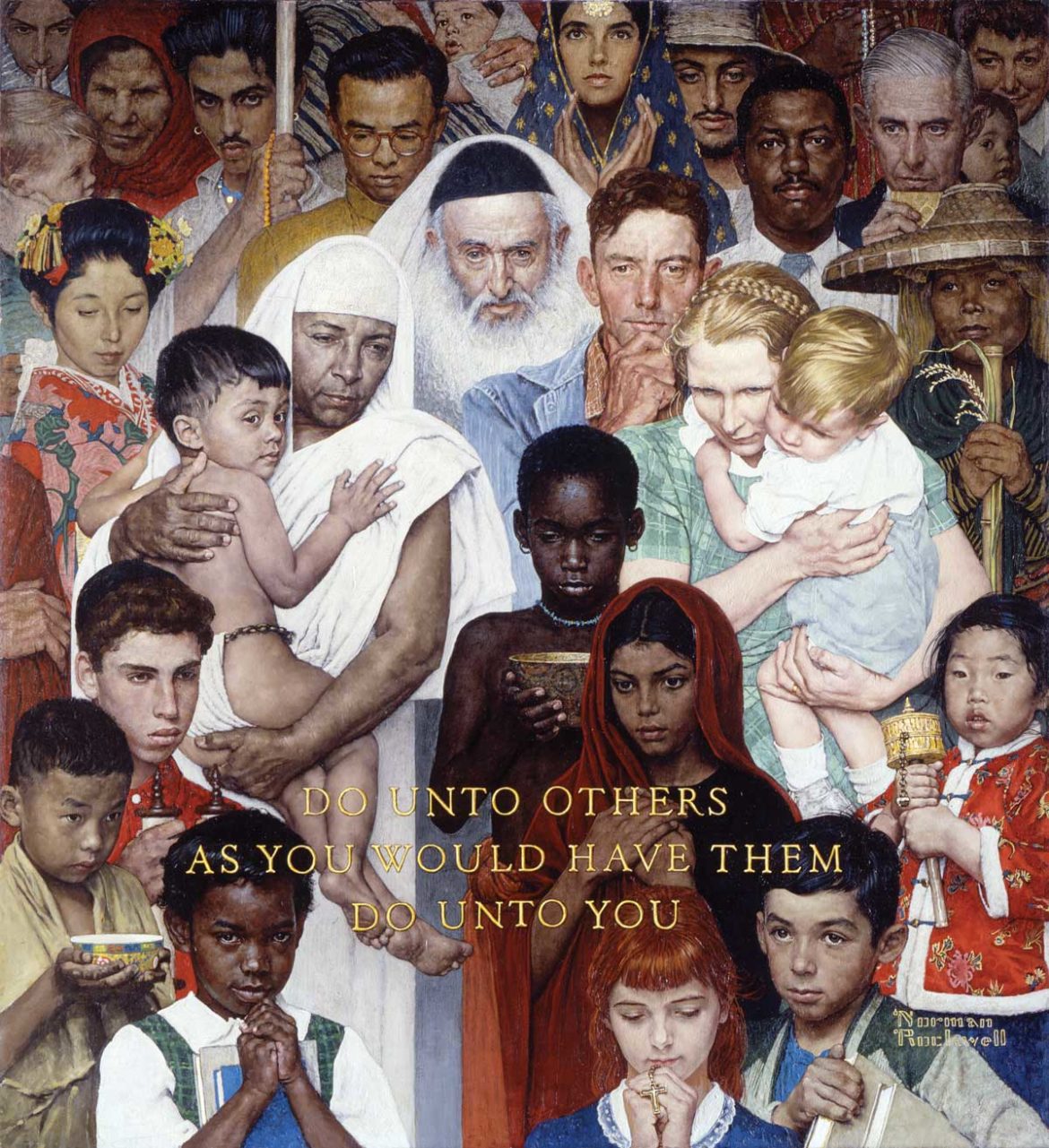 America’s mood was going through a period of change during the 60s. Televisions could be found by then in a growing number of American households. By then Norman Rockwell had been working as an illustrator for the Post for years, but USs fascination with celebrities meant that illustrations were being slowly replaced by portraits and photographs [1]. Maybe feeling that his job as an illustrator was not going to last forever thus feeling free to express his feelings, Rockwell began to explore social issues. He was a compassionate and liberal man, having traveled all his life and been welcomed wherever he went, he felt like a citizen of the world and his politics reflected his values [2]. “I would be reading up on comparative religion.

The thing is that all major religions have the Golden Rule in common”… “Do unto others as you would have them do unto you.” Not always the same words but the same meaning” [3]. His painting The Golden Rule reflected his ideas and experiences. His work was a Saturday Evening Post cover for April 1961. It was an intent to make a universal statement about humanity, some critics believed he failed in doing that and hailed his work as being too sentimental, but the overall response was extremely positive. In his later years, the pictures he drew were about national events such as the civil rights movement, and fewer were about the humorous side of life. He illustrated the young black girl who was the first to attend an all-white school. It was called The Problem We All Live With. He used Lynda Gunn as the model for Ruby Bridges the child being escorted to school by federal marshals.[4]

Rockwell produced two more illustrations that tackled racial tension and violence head-on. “Southern Justice”, published in 1965, was painted in response to the murder of three civil rights workers in Mississippi a year prior and is one of Rockwell’s darkest and most striking pieces. “New Kids in the Neighborhood”, published in 1967, uses black and white children to highlight the tensions of housing integration. The painting is a visual representation of holding one’s breath – tense yet cautiously hopeful – and accurately captures the competing attitudes of the day[5]. I would like to draw a comparison between Rockwell’s use of art as a tool of civil resistance and another well-known Italian Argentinian painter: Antonio Berni.

Berni is mainly associated mainly with “Nuovo Realismo”, the artistic movement he himself helped, a Latin American extension of social realism which itself is the art of drawing attention to the real socio-political conditions of the working class and a critique of the structure behind them. Berni mastered the art of representation of poverty and the effects of industrialization in Buenos Aires and other Argentinian cities. He witnessed first-hand labor demonstrations and the terrible effects of unemployment on the population; all in the framework of the “Infamous Decade”, the years following the 1943 military coup d’état in Buenos Aires.

As Rockwell did in the US, Berni began creating realistic paintings and murals depicting the struggles of the people.

But I find Bernis work more theoretically “sound” than Rockwell, he spent years in Europe and got to meet and learn from the protagonists of Europe’s realist and surrealist scene. He spent time studying revolutionary theory and collaborated with poets and artists of the leftist scene. One of Berni’s most interesting phases is his post-1950s years. A synthesis of Pop Art and Social Realism brought to life the Juanito Laguna saga. Juanito was destined to become the main character of a series of works that became a social narrative on industrialization and poverty, by pointing out the extreme wealth disparities existing between the wealthy Argentine bourgeois and the “Juanitos” of the slums. Art expert Mari Carmen Ramirez has described the Juanito works as an attempt to “seek out and record the typical living truth of underdeveloped countries and to bear witness to the terrible fruits of neocolonialism, with its resulting poverty and economic backwardness and their effect on populations driven by a fierce desire for progress, jobs, and the inclination to fight”[6]