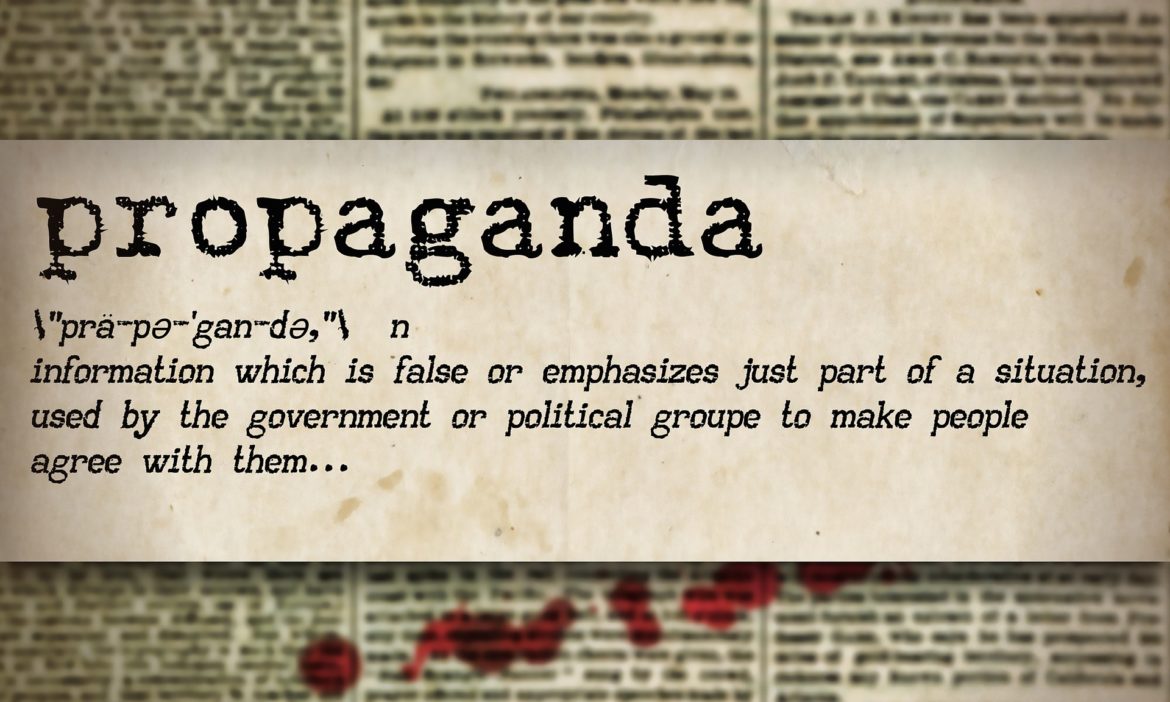 Published in 1988, Chomsky and Herman’s book– Manufacturing Consent: The political economy of the mass media, is more up to date than ever. In the volume, the authors theorize that U.S. mass media and communication apparatuses “are effective and powerful ideological institutions that carry out a system-supportive propaganda function, by reliance on market forces, internalized assumptions and self-censorship, and without overt coercion”.

“Like other approaches within the critical-Marxist tradition, it is concerned with exploring the relationship between ideology, communicative power and social class interest”[1], or in short, the propaganda model of communication. It represents a “general theory of the Free Press” and presents a “free market analysis”. In their tome, Chomsky and Herman describe the five editorially distorting filters that are applied to the media, and by doing this they find themselves analyzing the “source” of the distortion, rather than the effects it has on the population. Here is a brief introduction to the filters;

1. SIZE, OWNERSHIP AND PROFIT ORIENTATION OF THE MASS MEDIA

C. & H. investigated how the free market has managed to successfully accomplish what State control and intervention failed to. The expansion of the free market was accompanied by an “industrialization of the press.” “The total cost of establishing a national weekly on a profitable basis in 1837 was under a thousand pounds, with a break-even circulation of 6,200 copies. By 1867 the estimated start-up cost of a new London daily was 50,000 pounds. The Sunday Express, launched in 1918, spent over two million pounds before it broke even with a circulation of over 250,000”. Here we have the first filter, investment capital, the ownership of media is closely associated with the prerequisite of having a large size of investment capital. The entities that are able to access this amount of resources are either corporations or part of a conglomerate that will inevitability bend the information provided by their media outlets to fit their shareholders’ interests.

The exponential growth in size and importance of advertisement has pushed C&H to place it alongside capital costs when it came to ranking the factors allowing the free market to influence the mass media. Media, whether printed or online, has a price that customers are not willing to pay, “advertisers thus acquired a de facto licensing authority since, without their support, newspapers and media agencies ceased to be economically viable”. The advertiser’s personal agenda and their interests influence media prosperity and its survival on the market. Large corporation’s advertisers will do their best to shelter their own interests, it would be counterproductive to sponsor programs that engage in criticism of the system. But advertising companies interests are not to be confused with, for example, the interests of the Mega Corps as news are the “filler” that is nothing but a pretty frame around the advertisement; a frame that needs to be appealing enough to entice the reader and not conflict with their “buying mood”.

The third filter is put in place before the information even reaches the media outlet. “The mass media are drawn into a symbiotic relationship with powerful sources of information by economic necessity and reciprocity of interests”. The news “terminals” are at the center of news agencies’ attention, usually under the form of governmental outlets, official spokespeople, organizations and business corporations. The act of challenging these news sources can result in a backlash, thus the editors and the journalists are often wary of publishing information that may harm the source they depend on. In this case, the relationship between the two parts is passive, as “officials have and give the facts” and “reporters merely get them”.

Flak is the “negative responses to a media statement or TV program. It may take the form of letters, telegrams, phone calls, petitions, lawsuits, speeches and Bills before Congress and other modes of complaint, threat, and punitive action”. Mega Corps often unite their forces to form and subsidize flak machines. The difference between Flak and the other filters is substantial. While the aforementioned point is mostly derived from the analysis of the market, flak can be better described as the effort to manage PR.

Contextualizing their book during the McCarthyism years, C.H. chose anti-communism as the last of the filters, but it can be (and has been, in the last editions of the book) easily replaced by a more general notion of a common enemy. The idea of the “common foe” can be shaped to fit any criteria that better benefit the elites. During the Cold War Anticommunism served an exceptional role, as it “helps mobilize the populace against the enemy, and because the concept is fuzzy it can be used against anybody advocating policies that threaten property interests or support accommodation with Communist states and radicalism”, therefore fragmenting the opposition, the leftist parties, unions, radical entities as a whole, acting as the perfect tool for political control.

In normal times as well as at the highest peaks of “fear”, this filter exercises a profound effect on social media. News and issues are presented to the viewer in a “bipolar” fashion. My loss is the enemy’s gain and vice versa. Not siding with “us” means automatically siding with “them”. [2]

Here’s a partial picture, the five filters in all of their glory. In 1992 a film was produced, I have found it to be an insightful watch and it has been made available for free, here. C&H ideas may seem to be a paranoid and conspiratorial approach to modern media, but they have never failed to portray its patterns.